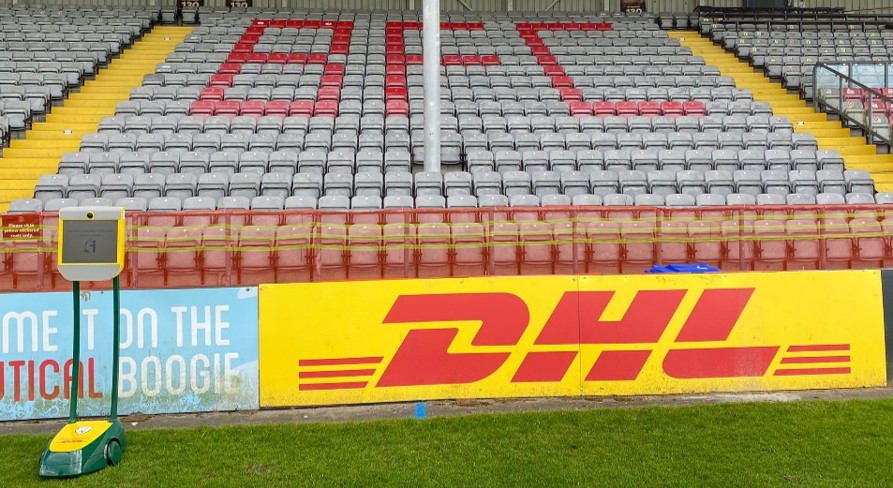 The main intention of the BEAM robot is to provide ill, injured or incapacitated children and young people with the opportunity to visit a stadium, attend a match, a training session or indeed any football event remotely. The robot is equipped with software that allows real interaction with the robot becoming the mouth, eyes, and ears of the young fan. Through an app, the young fan can join the players in the stadium or training ground making it possible for a fan who cannot attend the match due to illness or injury to join the players line-up in the tunnel, be pitch-side, and interact with the players.

When Bohemian FC saw the BEAM robot and what it could do for young football fans, they immediately reached out to the team at DHL to tell them about one of their biggest fans, Liam Roche. After suffering a shock spinal stroke while at his brothers football match, Liam was initially paralysed from the neck down and spent 6 and a half months in Temple Street. However, he continues to fight and improve. For Liam, Football and Bohemian FC in particular are a massive inspiration. 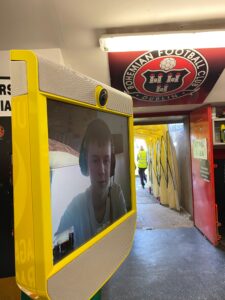 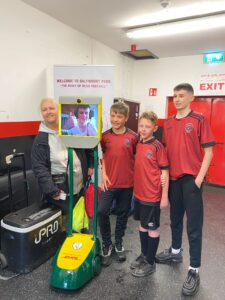 On Friday May 20th, Liam was the first ever virtual mascot using the BEAM Robot at a match, as Bohemian FC took on Sligo Rovers at Dalymount Park. ‘Beaming in’ from his home in Clare, Liam was a clear inspiration to all of the players, coaches and staff and Bohemian FC with the team securing a brilliant 2-1 win over their opponents.

DHL Express Ireland and Bohemian FC were delighted to provide Liam with the opportunity to virtually meet his heroes and enjoy this unique virtual experience. Throughout the evening he spent time speaking with the players in the tunnel, watching them warm up and even spent some time in the home team’s dressing room!

Take a look at the video of Liam’s experience below and learn more about his story from his mother Diane. 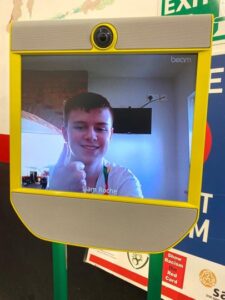 “Last September, Liam suffered a spinal stroke. It was completely out of the blue. We’d been at his brother’s soccer match and he just took two steps and then he was gone. Initially, he was paralyzed from the neck down. He was first taken to hospital in Limerick but then he was transferred to Temple Street. He spent six and a half months in Temple Street, and now he has been in the NRH (National Rehabilitation Hospital) for another month.

We are so very proud of him and how he has dealt with all of this. He is 16 now but he was only 15 when it happened. It is a lot for anyone but especially at his age. Even then, since day one, when we didn’t even know what a spinal stroke was, he has been completely determined. It took 10 days after for him to be able to move his toe again. The outlook at that stage was not good.

Football drives him on. He has been playing with Avenue United in Ennis for three or four years. He is doing everything he can to play again and stuff like last Friday meant the world to him, made him feel a part of the night, and gave him another thing to aspire to.

It was a great initiative by DHL and what better club to do it with than Bohemians. We got him the Bohs new jersey at the start of the season.  They’re a part of their community and they care – even the nurses in Temple Street were Bohs fans – and I couldn’t recommend them more.

Liam is determined that when he is able to do so that he will get to a game in-person, and we are very grateful for the support that he got from Bohs last Friday and the wider football community throughout.” 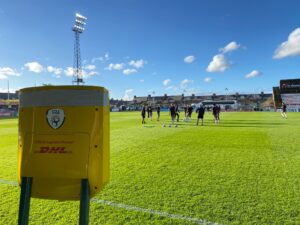 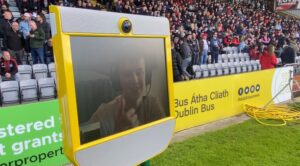